A Garden in Corfu 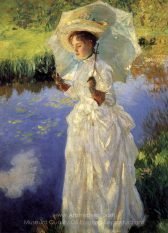 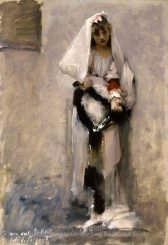 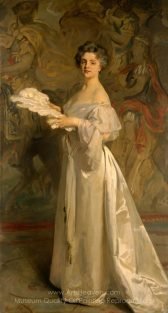 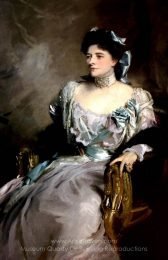 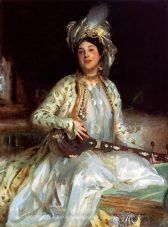 An Artist in His Studio

Bringing Down Marble from the Quarries to Carrara 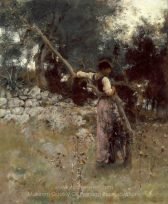 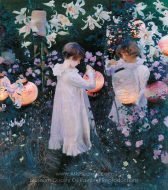 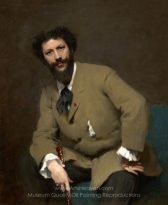 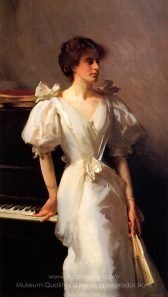 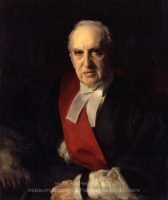 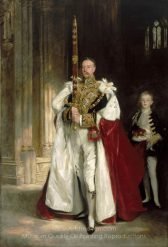 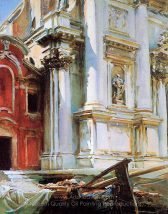 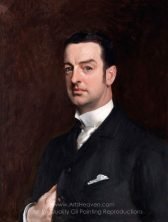 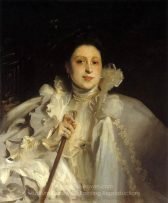 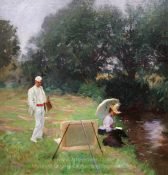 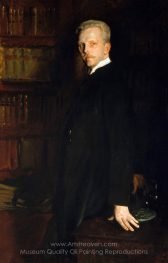 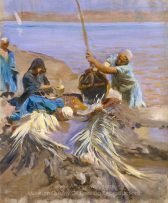 Egyptians Raising Water from the Nile 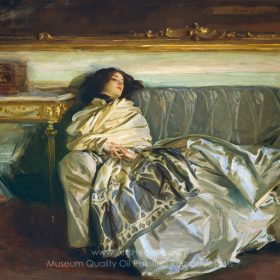 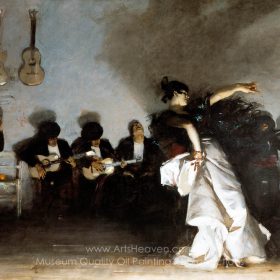 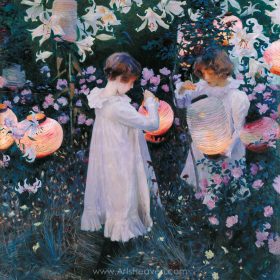 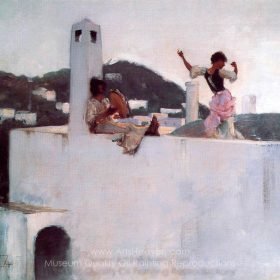 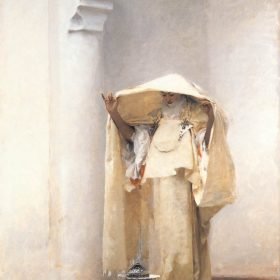 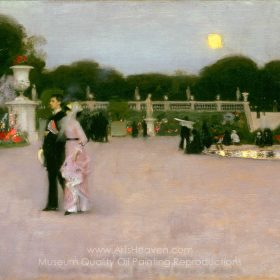 In the Luxembourg Gardens 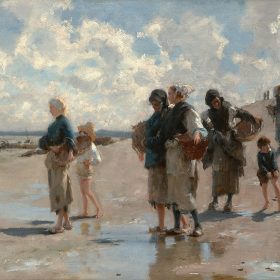 Fishing for Oyster at Cancale

John Singer Sargent was born in Florence, Italy on January 12, 1856. He was born to American ex-patriots who decided to live abroad after the death of their firstborn, a girl who would have been Sargent's older sister. His father was an ophthalmologist and his mother an amateur painter. Sargent had four younger siblings, two of whom died during childhood. The nomadic lifestyle led by Sargent's family left no opportunity for official schooling. The family traveled and lived in various European countries as seasons permitted, though the majority of their time was spent in France. Family finances were scarce as well, which further eliminated any possibility of private training. Sargent's parents were his teachers; Being avid painters themselves, they established the relevance of art in Sargent from an early age.

Despite his lack of formal education, John Singer Sargent was well-versed in literature, music, and especially art. He was also fluent in French, Italian, and German in addition to his native language--English. He finally began formal training by becoming the protege of Carolus Duran, a French portrait artist whose star had risen at a fast pace. Duran proved to be a very effective teacher; He employed a progressive teaching technique. His studious apprentice was unmistakably influenced by him, as evidenced in some of Sargent's early portraits in which Duran's technical precision seems to shine through.

John Singer Sargent became enrolled in France's premier art school in 1874 after passing its rigorous entrance exam in one sitting. He studied drawing techniques among other artistic directions while continuing his education with Duran. He shared a painting studio with James Beckwith, a fellow American painter who became his friend and connection to the American art scene.

As his education blossomed, his career began to bud. He started out painting landscapes, a pastime that seems to have been his true love as he returned to it in later life. After a short while though, he acquiesced to painting portraits as influenced by his young teacher, Duran. Sargent's painting technique was like no other American artist; While other American artists of his time painted solid colors from previously sketched prototypes, Sargent painted directly on the canvas, allowing for more spontaneity and flourish. This was a markedly European approach; It originated from the Spanish painter Diego Velazquez who also majorly influenced Sargent's later work.

Some of the most famous John Singer Sargent paintings are The Portrait of Madame X, El Jaleo, The Daughters of Edward Darley Boit, Carnation, Lily, Lily, Rose, and The Portrait of Lady Agnew of Lochnaw. He also painted yet another of his idols--Claude Monet--in an impressionistic painting in the later years of his formal career.

His notorious "Portrait of Madame X" was received with controversy though it was later critically acclaimed as his best work ever produced. The portrait is of Madame Pierre Gautreau, an acquaintance of someone familiar to Sargent who was reluctant to pose for the masterpiece at first. Unlike many of his other works which were commissioned paintings, this one was created at Sargent's request; He thought the young socialite, with her tantalizing beauty and not-so-subtle sexuality, would make a perfect subject of revolutionary art.

The portrait was a work of contrasting shades and hues. The model's pale complexion is skillfully complimented by her dark, almost invisible satin dress. The outfit itself was very risque for the time; A dress with a plunging neckline that revealed substantial cleavage and was held up only by satin straps that were manipulated slightly off the shoulders. This painting was met with outrage in France, putting a damper on Sargent's career there, while putting him on the map as a master of art in England and the United States.  The portrait entitled "Carnation, Lily, Lily, Rose" depicting young girls playing was the work that earned him a notable place in English society after he moved to London following the controversy. It is a painting of innocence, though brilliant in its nature. It somewhat resembles another of his works, "The Daughters of Edward Darley Boit", though that painting is thought to be more Freudian and generally more intricate.

After having painted many famous subjects, including John D. Rockefeller, various members of the Vanderbilt family, and several fellow painters, Sargent retired from painting portraits. He then took up mural painting with watercolors. His paintings largely consisted of landscapes and other natural themes. Thousands of sketches were also filled with drawings and miniature paintings which are now prominently displayed in various museums.

John Singer Sargent passed away in England in 1925 at the age of 69. He died a bachelor, though some scholars speculate that he might have been a fervent bisexual, a theory inferred from his noted promiscuity with both males and females during his time in France and Italy.