Antibes, the Point of the Islet

Antibes, the Rocks of the Islet

Beaulieu, The Bay of Fourmis

Berck, the Departure of the Boats

Boats at Anchor in the Harbor, Portrieux

Cayeux, Windmill in the Countryside, Morning

Cows by the Sea 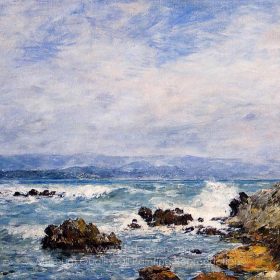 Antibes, the Point of the Islet

Cayeux, Windmill in the Countryside, Morning 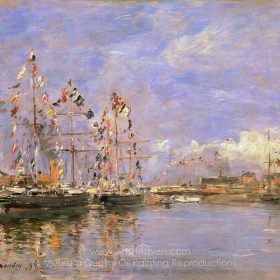 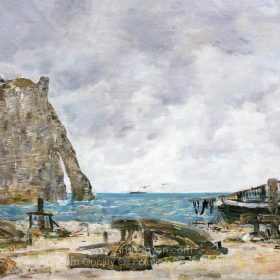 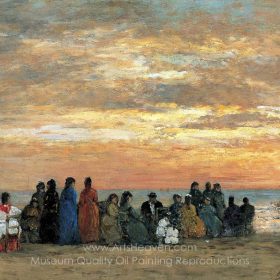 Figures on the Beach at Trouville 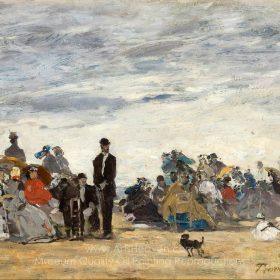 The Beach at Trouville

Eugène Boudin was one of the first French landscape painters to paint outdoors. Boudin was a marine painter and expert in the rendering of all that goes upon the sea and along its shores. His pastels, summary and economic, garnered the splendid eulogy of Baudelaire, and Jean Camille Corot who, gazing at his pictures, said to him, "You are the master of the sky."

Born at Honfleur, Normandy, the son of a sailor, he worked as a cabin boy on board the rickety steamer that sailed between Havre and Honfleur across the estuary of the Seine. But before old age came on him, Boudin's father abandoned seafaring, and his son gave it up too, having no real vocation for it, though he preserved to his last days much of a sailor's character, frankness, accessibility, and open-heartedness.

Dutch 17th century masters profoundly influenced him, and on meeting the Dutch painter Johan Barthold Jongkind, who already made his mark in French artistic circles, Boudin was advised by his new friend to paint outdoors (en Plein air). He also worked with Troyon and Isabey, and in 1859 met Gustave Courbet who introduced him to Charles Baudelaire, the first critic to draw Boudin’s talents to public attention when the artist made his debut at the 1859 Paris Salon.

In 1857 Boudin met the young Claude Monet who spent several months working with Boudin in his studio. The two remained lifelong friends and Monet later paid tribute to Boudin’s early influence. Boudin joined Monet and his young friends in the first Impressionist exhibition in 1874, but never considered himself a radical or innovator. Boudin’s growing reputation enabled him to travel extensively in the 1870s. He visited Belgium, the Netherlands, and southern France, and from 1892 to 1895 made regular trips to Venice. He continued to exhibit at the Paris Salons, receiving a third-place medal at the Paris Salon of 1881, and a gold medal at the 1889 Exposition Universelle. In 1892 Boudin was made a knight of the Légion d'honneur, a somewhat tardy recognition of his talents and influence on the art of his contemporaries.

Late in his life he returned to the south of France as a refuge from ill-health, and recognizing soon that the relief it could give him was almost spent, he returned to his home at Deauville, to die within sight of Channel waters and under Channel skies.