A Change of Seasons

A Coastal Town in Spain

A Day in the Country 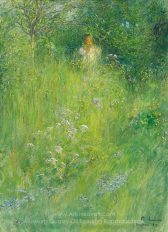 A Fairy (Kersti in the Meadow)

A Farm in Brittany

A Group of Cottages

A Lane Near Arles, Side of a Country Lane

A Pair of Leather Clogs

A Path Through a Ravine

A Vase of Flowers

A View of Salzburg

A Woman Walking in a Garden 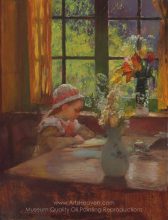 A Young Girl with Bonnet Reading by a Window

Against the Light, Algiers 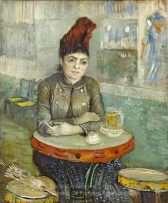 Algiers, The City seen from the Heights 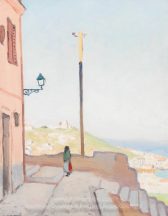 Algiers, View of the Casbah

Among the Mangoes at Martinique 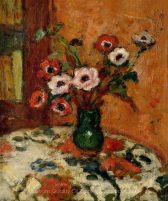 Anemones on a Flowered Tablecloth

Sometimes, a term is created not to distinguish a certain event or style, but as a way to separate a new idea from a past way of thinking. This was how the Post Impressionism art movement was born. Post Impressionism separated artists from the Impressionism's way of using the art techniques of light and color with natural objects. Instead, Post Impressionists used abstract forms and large brushstrokes to incorporate deep emotions to give a painting stronger symbolism.

Nobody really expected such an art movement. During those days, in the middle of the 1800s, Impressionism was going through a decline in the art community as a select group of artists rebelled against the Impressionism style of painting. These independent artists had developed their own unique styles that were undefined. Then, in 1910 during a Grafton Gallery exhibition in London, critic and artist Roger Fry dubbed the artwork as post-impressionism paintings. He did this in part to place Edouard Manet's name in with lesser-known French artists at his seminal exhibition at the Grafton Gallery.

Although some of the famous artists that we know today were involved in this new art movement, no two artists agreed on any type of character that would further define Post Impressionism. Instead, each artist had a radically different art style from the other artists in this movement. The only thing that united these artists together was to banish away the stifling superficiality associated with Impressionism artworks. They wanted artists to stop focusing on the techniques of art and instead return to where the subject matter itself took center stage.

Paris is credited with the start of Post Impressionism, as young artists from America, Britain, the Netherlands, and other countries descended onto the city to join up into this elite art movement. As the artists matured, they moved onward to live in other cities, as Paris could not keep them there due to each artist's own unique take of symbolism and expressionism that never allowed them to find a commonality with each other.

Vincent Van Gogh (1853-1890)
Vincent Van Gogh only used a bit of the Impressionism technique as it applied to vivid colors. He rejected the rest where canvas oil paintings were supposed to have a realistic appearance and fine finish as he instead thickly applied paint to the canvas to create expressive surface patterns. His style of art was later dubbed as Expressionism, as it invoked the emotional side in people when they looked upon his paintings.

Georges Seurat (1859-1891)
Georges Seurat hated Impressionism, claiming it was too limited and lacked any accurate details on the canvas. He invented the art form of Pointillism Art as he used dots of paint that blended together when a person viewed the painting from a distance. He still used color and light techniques commonly associated with Impressionism.

Paul Cezanne (1839-1906)
Famous artists everywhere claimed it was Paul Cezanne who captured the essence of Post Impressionism as he was the "elder" artist that moved Impressionism forward into other styles adopted in the early twentieth century. His style of painting, referred to as Cubism, used simple geometric components to create patterns and abstract objects, expanding on the limitations of Impressionism to make paintings of vibrant color and expression.

Paul Gauguin (1848-1903)
Paul Gauguin actually shared a small apartment with Vincent Van Gogh in France as they developed their own techniques of painting. He developed Fauvism, where he used symbolic elements and combined them with vivid colors to create an expressive vision. He sought to simplify the objects in his paintings and rely on the colors of the painting to increase the viewer's emotions.