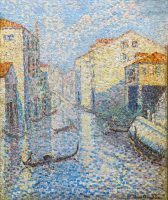 A Canal in Venice

A River Bank (The Seine at Asniares)

Almond Trees, Against the Light

Bathers Around a Rock

Bust of a Woman Tilted Towards the Rear

Cap Bénat, Pine On The Coast 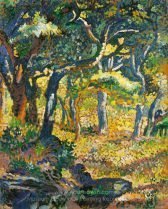 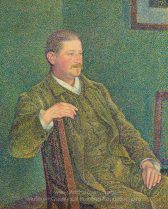 Entrance of the Port of Honfleur

Entrance to the Port of La Rochelle

Just like the names of several other art movements, Pointillism - also sometimes known as Post Impressionism - was meant to be a derogatory name when it was coined at the end of the 19th century. The criticism was directed at the artist Georges Seurat, the founder of the then-innovative way of painting, who developed the new way of painting around 1886.

One of Seurat's most famous paintings is titled ‘Sunday Afternoon on La Grande Jatte’, which today hangs in the Art Institute of Chicago. If you look closely at the painting, you can see that it is actually made up of thousands of little dots of paint, which when seen from a distance, seem to all merge together. It took Seurat a couple of years to complete this painting; he also produced over 50 studies for it before he considered he had perfected the technique.

Like many other now-famous artists of the time, Seurat was rejected by the Paris Salon and began to seek the company and inspiration of other rejected or independent artists. He was also heavily influenced by scientific studies of color and its effects; these various studies were largely responsible for Seurat developing his now-famous painting technique. He also believed that the Pointillism technique would produce a brighter, more vibrant picture than regular methods. Seurat died at the age of 31 and it is interesting to speculate what else he may have done with this method.

A French chemist, Michel Chevreul inadvertently realized that two colors, when placed next to each other, would seem to look like another color when viewed from a distance. He also discovered that if you stare at a color for a few minutes then take your eyes off the subject, you will see that color’s opposite - or complementary - color. An American physicist, Ogden Rood, also came up with similar theories involving colors placed next to each other and stated that from a distance, two adjoining colors look like a third. These two people were responsible for influencing the development of Pointillism more than anything else.

Today Seurat is the most famous Pointillist, although other artists were intrigued by the new style of painting and soon began to produce similar works. Paul Signac became probably the biggest supporter of Pointillism and his paintings of the French coast show the new technique to good effect. Camille Pissarro experimented briefly with the new way of painting; some of his paintings of London and Paris use the effect, although he eventually tired of it and turned to other styles. Another artist, Henri-Edmond Cross was also an enthusiastic Pointillist painter; he was also responsible for founding the Society of Independent Artists, along with Seurat.

The tiny dots of paint are the most striking feature of Pointillism paintings; many are also characterized by bright colors and like Impressionist paintings, can be said to have a dreamlike quality. In Seurat’s paintings, the individual brushstrokes are virtually invisible unless you peer closely; whereas, with other painters such as Signac, the different strokes are quite apparent. Using virtually invisible brushstrokes allowed the painters to show such effects as objects in bright sunshine, and contrasts between light and shadow. Oil paint was used largely because it was the established medium of the time; it also had the advantage of the colors not running together. Pointillist subject matter largely consisted of landscapes, seascapes, and portraits

Pointillism was a relatively short-lived movement, although it did influence Fauvism, in particular, Paul Gauguin, as well as Divisionism, a similar movement which relied on the use of primary colors. And if you look closely at your TV screen you will see the same technique is used there to create an overall effect.