The Musée d’Orsay is a museum in Paris, France, on the Left Bank of the Seine. It is housed in the former Gare d’Orsay, a Beaux-Arts railway station built between 1898 and 1900. The museum holds mainly French art dating from 1848 to 1914, including paintings, sculptures, furniture, and photography. Read more …

A Corner of Wood in the Sablons

A Studio on the Batignolles 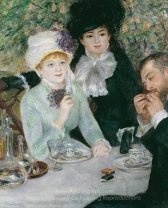 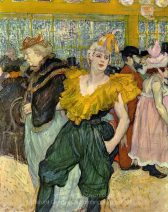 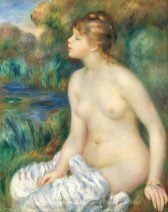 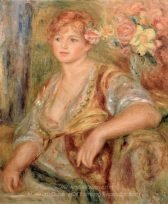 Blonde Girl with a Rose 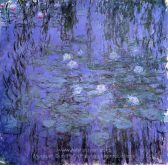 Boat in the Flood at Port Marly 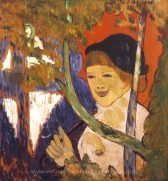 Breton Girl with a Red Umbrella 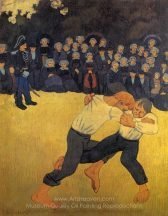 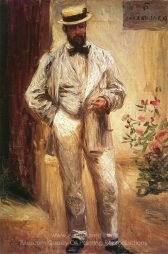 Charles Le Coeur in His Garden 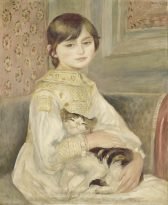 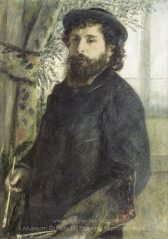 Located in a former railway station on the left bank of the River Seine, the Musée d'Orsay is one of the most prominent art museums in Western Europe. It is best known for its expansive collection of impressionist and post-impressionist works -- currently the largest collection of this artistic genre on Earth. In fact, the original purpose of the Musée d'Orsay was to bridge the artistic gap left between the styles featured in the Louvre and the National Museum of Modern Art. Through its creation and preservation, the Musee d'Orsay has allowed for the existence of an uninterrupted timeline in the Parisian showcase of great art.

The impressionist and post-impressionist repertoire featured at the Musée d'Orsay is far too vast to be experienced in one sitting. However, many visitors are limited on time and can only fit in a few Musee d'Orsay famous oil paintings. If you are hoping to experience the best of the Musee d'Orsay museum paintings, you will want to make a point of visiting the following masterpieces:

Starry Night Over The Rhone
24 of Vincent Van Gogh's greatest works of art are featured among the many displays of Musée d'Orsay's famous paintings. While all of Van Gogh's work is worth visiting, Starry Night Over The Rhone may be the most impressive of the Musée d'Orsay's Van Gogh collections. The iconic painting features a stunning night view of the French city of Arles. The color combinations used to capture the night sky have impressed and intrigued audiences for over a century.

The Birth Of Venus
One of Alexandre Cabanel's better-known works, The Birth of Venus combines a more historical approach to art with an eroticism barely cloaked by the painting's more traditional features. Although Cabanel considered himself largely an opponent of impressionists, his work today is housed among some of the most prominent impressionist works -- the Musée d'Orsay Museum paintings.

The second Birth of Venus can also be found at the Musee d'Orsay, this one the work of William-Adolphe Bouguereau. This is a very popular depiction of Venus' birth, notable in that Venus is not actually birthed from the sea but delivered in a shell, already grown into a woman.

Whistler's Mother
Sometimes referred to as the Victorian Mona Lisa, James McNeill Whistler's portrait of his mother may be the most famous American painting housed outside of the United States. Although a rare sight in American museums, Whistler's Mother remains recognizable, in part due to its featured position on a Great Depression-era U.S. stamp.

The Gleaners
Completed in 1857 by the talented Jean-Francois Millet The Gleaners is an oil painting best known for stirring up controversy among upper French society. This controversy arose from the paintings' sympathetic portrayal of peasants, three of whom are shown to be hard at work in the image. Today, however, The Gleaners is widely appreciated as an expression of the burdens put upon the impoverished members of the lower class.

The Musée d'Orsay is an attraction worth visiting, both for advanced art enthusiasts and the uninitiated. You'll be amazed by the range of paintings, sculptures and architecture represented there -- only a tiny subsample of which has been highlighted above. Expand your horizons with a visit to one of France's iconic art museums!