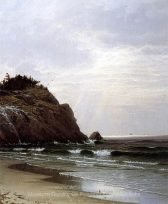 A Fair Day on the Coast

A Passing Shower in the Yellowstone Canyon

A Side Canyon, Grand Canyon, Arizona

A Storm in the Rocky Mountains, Mt. Rosalie

A Summer Day at the Seashore, New England

A View Near Tivoli (Morning)

A View of the Mountain Pass

A View of the Two Lakes and Mountain House, Catskill Mountains

Across the Meadows, Montclair, New Jersey

Afternoon by the Ocean

Afternoon on the Hudson

Along the Maine Coast 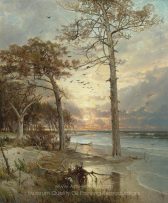 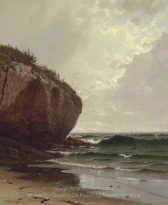 Prior to 1825, the landscape as art was seen as nothing more than the background for the subject of the piece. With the exception of property owners commissioning artists to paint topographical illustrations of there farms and communities or landmarks, or for Europeans who had a keen interest in the developing New World, the landscape as muse was not a consideration.

It was American, Thomas Cole, who became one of the most prominent of the American Landscape movement when he established the Hudson River School in 1825. The group was so named for their paintings that depicted the Hudson River Valley and its surrounding areas including the Catskill, Adirondack, and White Mountains.

Thomas Cole and fellow artist, Asher B. Durand, held the strong belief that the study and painting of nature and her wonderful offerings would lead the artist to enlightenment and to a true connection to the divine.

The beginning of the American Landscape era came at a time when the country was grasping for her identity, a time when she was establishing her independence from European influence and stretching her limbs towards progress and growth. As the new country continued to be settled, the second generation of the Hudson River group would share this growth, expanding to include vast landscapes that went beyond the Hudson River area influence.

A student to Thomas Cole, Frederic Edwin Church had mastered his skill for landscape works at an early age. He was touted by Cole as having, " . . . the finest eye for drawing in the world."

In 1848, Church was the youngest painter ever to be elected to the National Academy of Design and was the first American artist to ever use his talent on location in South Africa.

The works of the American Landscape movement were often as vast in size as the stunning and rugged countryside they depicted. One such piece, produced by Frederic Edwin Church in 1846, "Hooker and Company Journeying Through the Wilderness From Plymouth to Hartford", measured over five feet in width. The piece does depict the early settlers on their quest, however they far from play a leading role in the painting. The towering trees, the grand rocky cliff, and the river winding its way towards a vast, mountainous horizon are the main points of the work. While the portrayal of the settlers is an important component of the work, it is the power of the landscape that dominates the piece.

Artists such as these made the movement an integral part of not just art history, but America’s as well. These great painters produced work that convinced an era that nature could be viewed as so much more than just background and could stand alone as the subject.

The power of the movement was strong and its influence spilled over into other styles of painting including expressionism and surrealism. The great American Landscape artists did so much more than bring nature to the forefront; they actually helped to shape a new and developing country’s identity.